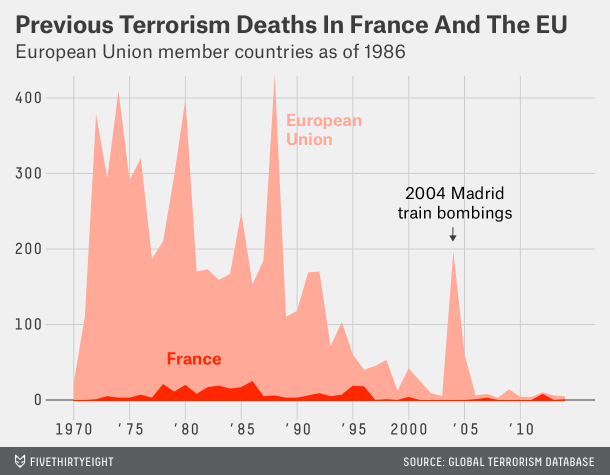 "Every parent who has stayed up waiting for a teenage daughter who is late from a party will recognize the feeling. You may know that there is really (almost) nothing to worry about, but you cannot help images of disaster from coming to mind. As Slovic has argued, the amount of concern is not adequately sensitive to the probability of harm; you are imagining the numerator—the tragic story you saw on the news—and not thinking about the denominator. Sunstein has coined the phrase “probability neglect” to describe the pattern. The combination of probability neglect with the social mechanisms of availability cascades inevitably leads to gross exaggeration of minor threats, sometimes with important consequences.

In today’s world, terrorists are the most significant practitioners of the art of inducing availability cascades. With a few horrible exceptions such as 9/11, the number of casualties from terror attacks is very small relative to other causes of death. Even in countries that have been targets of intensive terror campaigns, such as Israel, the weekly number of casualties almost never came close to the number of traffic deaths. The difference is in the availability of the two risks, the ease and the frequency with which they come to mind. Gruesome images, endlessly repeated in the media, cause everyone to be on edge. As I know from experience, it is difficult to reason oneself into a state of complete calm. Terrorism speaks directly to System 1.

My experience illustrates how terrorism works and why it is so effective: it induces an availability cascade. An extremely vivid image of death and damage, constantly reinforced by media attention and frequent conversations, becomes highly accessible, especially if it is associated with a specific situation such as the sight of a bus. The emotional arousal is associative, automatic, and uncontrolled, and it produces an impulse for protective action. System 2 may “know” that the probability is low, but this knowledge does not eliminate the self-generated discomfort and the wish to avoid it. System 1 cannot be turned off. The emotion is not only disproportionate to the probability, it is also insensitive to the exact level of probability. Suppose that two cities have been warned about the presence of suicide bombers. Residents of one city are told that two bombers are ready to strike. Residents of another city are told of a single bomber. Their risk is lower by half, but do they feel much safer?"